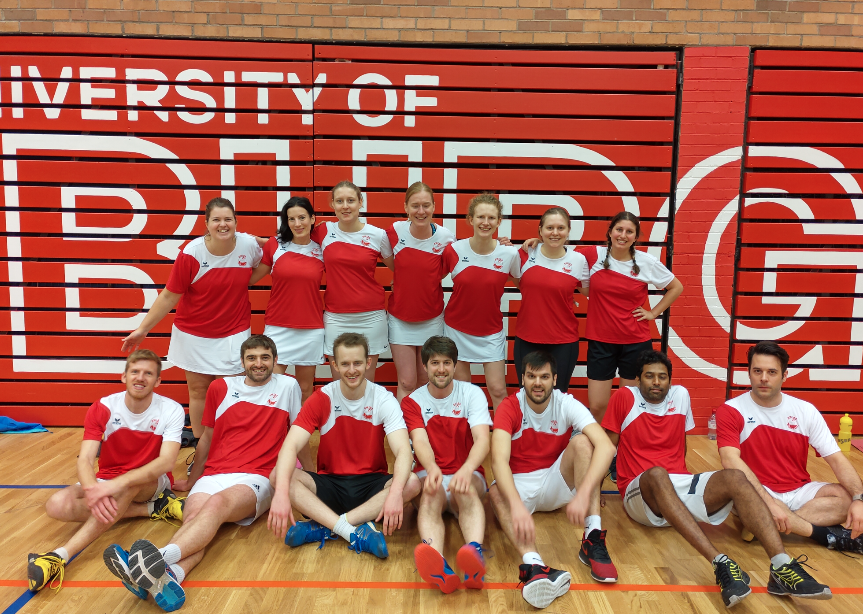 After last year’s premiere at the Edinburgh tournament, there was no question whether we would return. 14 players from Basel, Bern and Zurich represented Switzerland this year. Our team consisted of a nice mix from experienced players to players only just discovering the wonderful world of Korfball. Amongst others, we had strong players Louisa, Vas and Gian Reto who were part of the Swiss Team having successfully qualified in Lviv for the EKC.

Representing Switzerland, we obviously had a responsibility to uphold the Swiss virtues (and stereotypes) and were therefore over punctual. So much so, that the sports center hadn’t even opened yet when we arrived. The first game was tough, not being used to the loud hall and music while playing we could barely hear each other, or the advice shouted to us from the sidelines. Over the course of the following games, we learned to handle it and made some strategic choices when choosing in which half to attack and defend. It took us a few games to get to know each other since we play in different clubs. But over some game time, we steadily improved. Much to the credit of our coaches Louisa and Jantine, who did a wonderful job.

The Swiss team in attack (left), where Melina is about to make a goal (ball is flying in the air on the picture), and the Swiss team in defense (right) doing a great job! The match against Reading R Tired was, of course, one of the most important considering that Louisa’s hometown is Reading. Nothing less than a win would do and we were happy to make her proud and win that match. Spending the morning in the sports hall we could also watch many interesting games, discuss tactics and learn from other teams. Especially for our new players, this was an excellent opportunity to experience Korfball in “real life”. We are so proud to see the growth of all individual players over the weekend.

After five intense games, we were happy to rest and spend the afternoon relaxing and chatting. Since the next main event was still to come: the legendary Ceilidh! This Scottish traditional dance is as much part of the Tournament as Korf itself. In a wonderful venue reminiscent of a knights hall, we followed the instructions of the Ceilidh band and clapped, hopped, twirled, swang and flew (yes, there was flying involved!) our way through the room. Not even the most reluctant dancers could resist taking to the dancefloor.

The next morning saw us return to the sports hall slightly worse for wear from yesterday’s exertions. Two players down with flu and headache, we started again with a tough game against Manchester Hawks. All the games on Sunday were close. Again our performance increased over the 3 games. The games were challenges to which we rose gladly. After our last game, we stayed to watch the final games deciding on the winner of the tournament and of course cheered for our friends from Stockholm playing for 3rd/4th place in parallel.

At Swiss Korfball we are welcoming all nationalities, which can also be seen in our team of Australian, Dutch, English, Greek, Hungarian, Indian and Swiss players. After so much Korf, we needed a rest and our British players took the opportunity to introduce the team to the delights of afternoon tea with scones, clotted cream, crumpets. Drinking tea and chatting rounded off the weekend nicely. Finishing a proud 16th place out of 24 teams, we congratulate ourselves on a successful tournament and look forward to returning in 2021!